How often do you find yourself despairing over mistakes you have made? Do you judge yourself in comparison to others? When you fail at something, do you feel like a “failure”?

If these seem familiar, you’re not alone. The tendency to be excessively self-critical will vary a lot from person to person, but still it remains prevalent. I hear clients, family members, friends and strangers needlessly criticising themselves all the time. But is this really necessary?

Please read to the end if you have the time – this takes some explaining!

What self-criticism does to our mind and behaviour

We tend to think that self-criticism is necessary in order to “motivate” ourselves to take action, resolve problems and try harder. But the problem with self-criticism is that it is rarely constructive. In fact, it’s generally quite damaging to your motivation and mindset.

If the extent of your self-criticism amounts to responses such as: “OK that wasn’t ideal, what can I do to resolve this?”, then you’re in a good position to respond effectively and find a solution to whatever is bothering you. But for many people, self-criticism extends into the realms of harsh self-judgments, unrealistic expectations and excessive dwelling on mistakes or failures. These thought patterns have one major thing in common: they make you feel even worse.

Say something happens that leads you to feel disappointed, frustrated or angry with yourself. This could be anything really – noticing you have gained a couple of pounds when you are trying to lose weight, forgetting to run an important errand, failing to motivate yourself to do something or upsetting somebody by accident. Take any situation where you could end up feeling negative towards yourself.

Now ask yourself: what actually happens when I start to criticise myself?

In such situations, it is natural to experience some negative feelings. However, the second you start to self-criticise, things can get a whole lot worse.

When people internally beat themselves up, it elicits unpleasant thoughts and emotions, just like it would if somebody else insulted or criticised them. In turn, this triggers a chain reaction of negative thoughts. [Note: when negative thoughts about anything crop up it can be difficult not to indulge them, because they are relatively compelling. However, the crucial difference is between allowing those thoughts to be there, and actively deliberating over them and allowing them to develop. I will explain after this section.]

For example, getting angry or frustrated with yourself for “failing” at something often elicits the general feeling of “I can’t do this”, “I’m not capable”, or even “I’m useless”. We give up too quickly because we take any type of failure as evidence of our ability. If you actively pursue this negative pattern of thinking, it will knock your confidence, and eventually any harsh judgments will extend and generalise to other areas of your life. For example, dwelling the thought that you are “demotivated” or fundamentally “lazy” has implications for other things that you might be doing, whether that may be in your career, hobbies, relationships and much more. In addition, when we hone in on negative thought processes, other negative thoughts are activated via related neural networks in our brains, so self-criticism in one domain often means that people end up sitting and thinking about all of the other things they don’t like about themselves.

Essentially, beating yourself up in response to failure and placing too much importance on it can cause you to over-identify with it, resulting in self-doubt and hopelessness. So self-criticism is not helpful nor necessary!

Let go of the idea that self-criticism is essential for motivation.

My partner is a fountain of wisdom; he makes insightful and objective observations that help to broaden my perspective on things. [He would make an epic psychologist despite coming from a physics background!] I was talking to him about the issue of self-criticism, and how easy it is to allow failure or disappointment with ourselves to affect our subsequent moods.

He pointed out that motivation does not have to come from reacting negatively and beating ourselves up – in fact, it rarely does. His view was that sustainable, life-enhancing motivation is developed out of a positive desire to achieve something, and I couldn’t agree more. It’s the active pursuit of a goal, not the result of self-punishment or the desire to avoid something. If you think about it, being in a bad mood and verbally trashing yourself isn’t going to make you feel motivated or confident that you can achieve what you are trying to achieve.

So what do we do about this?

The solution to self-criticism does not necessarily lie in trying to “argue” with your negative thoughts or replace them with insincere mantras that you don’t believe, but first by taking a step back.

Self-criticism can be so habitual that we don’t realise that we are doing it, and hence do not stop to think about how it is actually affecting us. So the first step in learning how to respond more constructively is in recognising where we begin to go wrong.

This is where mindfulness comes in. Mindfulness takes some practice, but it is a powerful way of becoming more self-aware. It is this self-awareness that all

ows us to take action to resolve any problems we are having. If you have no clue about what triggers self-criticism in the first place or where your thought trains go, you can’t do much about it. Becoming more self-aware is quite simple in itself, and there are 2 important parts to it:

1. Notice the situations that elicit self-criticism.
What kind of situations cause you to start beating yourself up? Is it affected by your mood or the company you keep?

2. Pay attention to where your thoughts go from there.

When you start to self-criticise, just notice where your thoughts start to lead. At the beginning of this post I mentioned a few thought patterns that may be familiar to people who self-criticise habitually. Comparing yourself to others, over-identifying with your failures and attributing too much importance to mistakes are all surefire ways of eliciting a lot of self-criticism, so watch out for these patterns!

3. Be compassionate – i.e. realistic – with yourself.
Having developed more self-awareness, an effective way of then dealing with excessive self-criticism is to have some self-compassion. [Dr. Kristin Neff is the leading researcher on this matter and has conducted reams of research into it, so give her a Google and check her stuff out!]. Before you scoff and roll your eyes, bear with me – it isn’t as “airy-fairy” as it sounds. Self-compassion is literally the same as having compassion for others, but directing this towards yourself. It is about recognising that you’ve got something difficult to deal with, empathising with yourself as a human being (i.e. naturally imperfect), and then deciding what you can do about it. 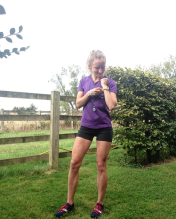 Self-compassion also isn’t refusing to take responsibility, hold yourself accountable or get things done. It is about being realistic, and recognising that as a human being you will make mistakes and fail at things – failure is how we learn.

Newsflash: you don’t have to suppress any feelings of anger, disappointment, frustration or sadness. You don’t have to like yourself or be pleased with yourself either. It’s more helpful to accept that you’re p***ed off and say “I may not like it but this is where I am, so where do I go from here?”

This leads onto my final point.

4. Opt for constructive evaluation over self-criticism.

If you have made a mistake or failed to hit a goal, it is possible to evaluate why without beating yourself up. Say I go on a diet but realise I have gained half a stone on holiday. I can either get annoyed and down on myself, complaining of how “lazy, fat, demotivated and useless” I am, or I can say, “OK well I enjoyed myself on holiday and I’m not where I want to be as a result, but now I’m back home I can focus and start to change my habits.” Which sounds like it will lead to a better result?

I know it is difficult not to feel negatively in these situations, and that is fine – it is just recognising that the ensuing thoughts are unhelpful, and that dwelling on them will not move you any closer to your goal.

One critical factor to consider when pondering over mistakes or failures is how much thought and effort you have put into the necessary tasks. Setting unrealistic goals or trying to do too many things at once will inevitably create disappointment, because you simply won’t have the time and cognitive resources to put into them. Ask yourself whether your targets are realistic, and whether you are able to put the time and effort in to achieve what you want to achieve.

Back to what my partner said – sustainable motivation stems from a positive desire to achieve something that you value. If you are disappointed or frustrated by something, simply evaluate what went wrong and think about what positive step you can take next. While self-criticism involves basically insulting yourself and providing nothing positive, self-evaluation requires objectively looking at what went wrong, and asking yourself – what do I need to do to move forward? What motivated me in the first place, and why do I care about this?

To summarise: self-criticism isn’t necessary, ever!

If you are a chronic self-critic, try these steps out. They take practice, and what works for some people (i.e. me) will not work for others, but I have certainly found it a welcome remedy for my negative self-talk and I hope you do too!